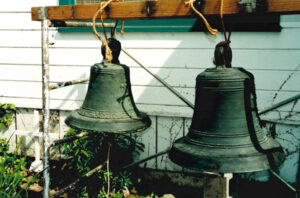 The Presidio Chapel bells, before installation in 2001. Photo by Michael H. Imwalle.

Two particular Spanish colonial period bells from the Santa Bárbara Presidio Chapel have traveled many miles – about 11,000 miles, before they were finally returned to the chapel and installed in the newly rebuilt chapel bell tower in 2001. Where have these bells traveled? They were originally cast in Zacatecas, Mexico in 1781 and 1792, then made their way to the Santa Bárbara Presidio Chapel. In 1855, the older bell was moved from the chapel to neighboring Our Lady of Sorrows Church. In 1904, the bell was purchased by a gentleman from Massachusetts who later left it to the Milton Academy in Milton, Massachusetts, where it resided until 1981. The second bell also moved to Our Lady of Sorrows Church until 1929, after which it was installed at a Jesuit retreat house in Los Altos, California. The retreat house returned it to the Santa Barbara Trust for Historic Preservation (SBTHP) in 1978. Michael H. Imwalle, Associate Executive Director for Cultural Resources with SBTHP, has been researching how these bells were rung when they were at the Presidio. “They would have been used to call the residents of the Presidio for mass, the rosary, rations, and to sound quarters for the watch at night. They also regulated work schedules, welcomed the arrival of prominent visitors, signaled alarms, and celebrated festivities” (Tim Aceves, “A Brief History of the Presidio Chapel Bells,” https://sbthp.wordpress.com/2020/07/30/revisitingthepresidiobells/, July 30, 2020). During his research, Imwalle learned about a succession of bell ringers dating back to 1820 at Mission San Luis Obispo. He also located a recording from around 1947 or 1948 of one of these bell ringers, Gregorio Silverio, ringing the mission bells at San Luis Obispo. 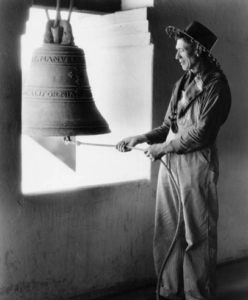