Always a visita of Caborca in Jesuit times, a small adobe chapel was under construction here in 1706. By 1730, it was gone, and a second adobe building, one with a straw and dirt roof, was apparently erected in the 1760s after the Pima Rebellion and before the Jesuit expulsion.

This structure was so poorly furnished that when Father Juan Marcelo Díaz, who in 1768 was stationed at the Caborca cabecera, went there to say Mass, he had to take all of his equipment with him. In 1772, Father Antonio Reyes wrote of Pitiquito that it had neither a church nor a house for the missionary.

This situation was remedied beginning in the late 1770s when Father José Matías Moreno started to raise the lime-mortared brick church whose remodeled form one sees at Pitiquito today. Moreno was baptizing Indians at Pitiquito by March of 1776, and he probably started construction then or very soon afterward. It was his successor, Father Pedro Font, who was baptizing people at Pitiquito by January of 1780, who brought the building to its initial state of completion before his death a little less than two years later. It is ironic that the builders of Pitiquito died in the same year just seven weeks apart: Father Moreno at the hands of Quechan Indians at Yuma on July 17, 1781, and father Font of natural causes in Pitiquito on September 6, 1781. 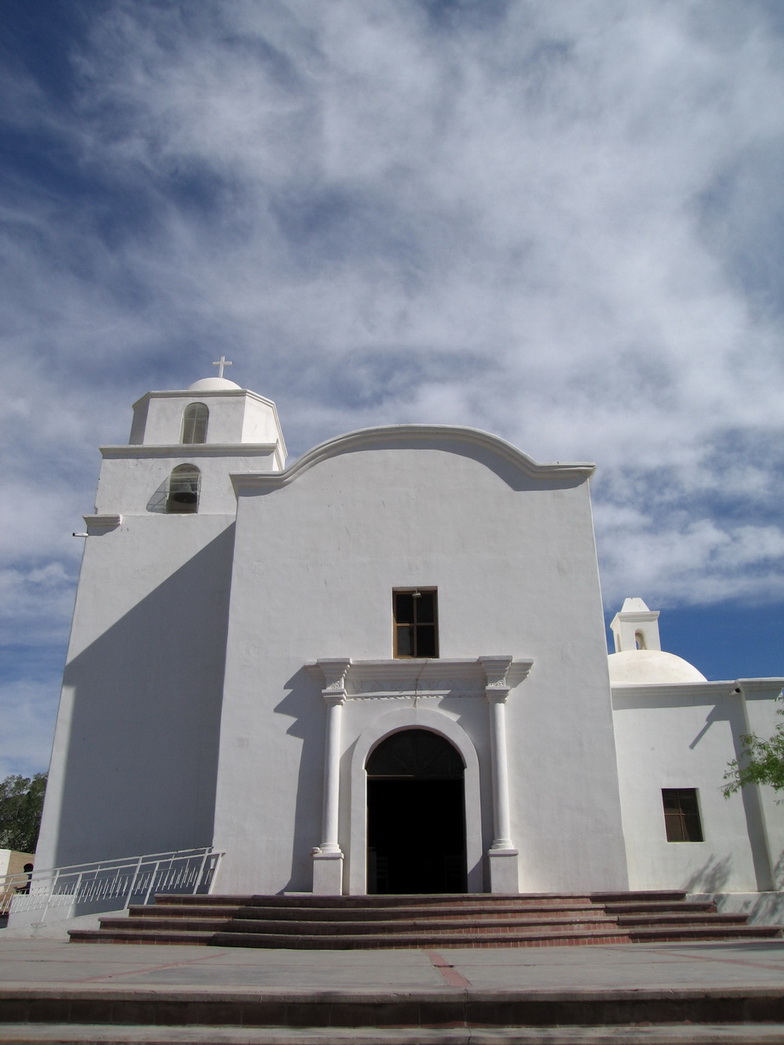 Father Yturralde wrote in 1797 that the church and sacristy were “two very fine rooms of brick and lime mortar,” there was a vaulted roof, and the floors were of brick.

It appears that many additions and alterations have been made at Pitiquito, both inside and out, since 1781. Records describing these have yet to come to light.

The Handwriting on the Wall

In l 966, a little girl was attending Mass in the church at Pitiquito when her attention began to stray. She looked up at a column on the wall and saw the image of a human skeleton beginning to appear on its surface. The child’s mother followed her gaze, and screamed when she, too, saw the apparition. One can imagine the commotion that followed. And as if having a picture of a skeleton materialize were not enough, so did the words MANE THECEL PHARES, a version of the biblical handwriting on the wall recorded in the Book of Daniel (5: 5-28) as MENE, MENE, TEKEL, PHARSIN, interpreted to mean that King Belshazzar had been found wanting in the scales of justice and that God was about to divide his kingdom and award it to the Medes and Persians.

Later—and calmer—investigation revealed that many paintings decorating the walls of Pitiquito’s church had been whitewashed over many years previously. Women had begun to use detergent to clean the white walls, and its chemicals eventually reacted with the lime in the whitewash to disclose the ancient art. Since then, more of these dry frescoes have been uncovered by Mexican conservation experts, and visitors can now enjoy paintings of Lucifer, the Virgin Mary, symbols of the Passion of Christ, attributes of three of the four evangelists, the scales of justice, architectural elements, and other depictions and lettering as yet undeciphered. These works, genuinely folk art, appear to date from the nineteenth century. 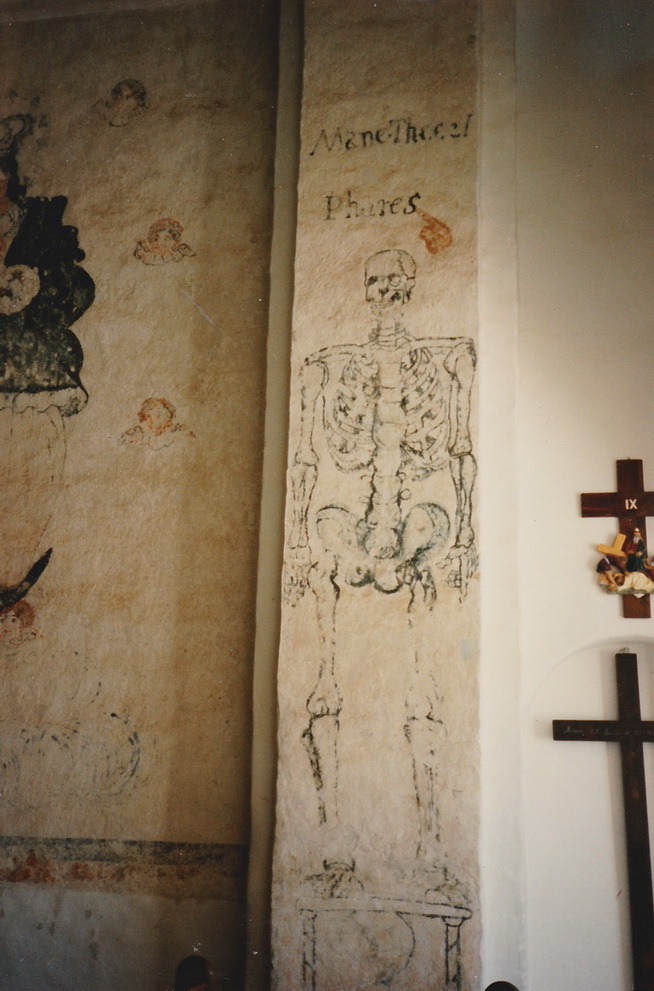 Equally interesting are painted frames that probably date from the time the church was finished in its original form about 1781. These are frames around what once were presumably depictions of the fourteen stations of the cross, events in the story of Christ’s Passion. These frames for images of the stations, if indeed that is what was being framed, are on the original layer of the walls’ surface and were concealed under other coats of plaster and whitewash. Serpents form the vertical sides of one of the frames, and the upper horizontal side is capped with triangles and heads of figures wearing what appear to be ceremonial headdresses. What makes them important is that these modest painted frames may well represent the only place in any church in the Pimería Alta where the hand of an O’odham painter survives.