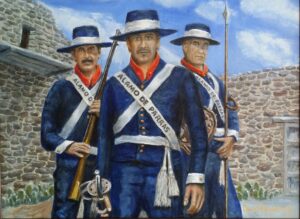 On September 24, 2021, in honor of Hispanic Heritage Month, The Alamo and the Jose Miguel Arciniega Descendants Society (JMADS) unveiled an oil painting by artist David Baisden, Alamo de Parras, that was commissioned by Donna Lee De Leon, President of JMADS (2016) and donated to the Alamo Collection. This new acquisition was given in memory of the 100 mounted lancers of the Second Flying Company of San Carlos de Parras de Alamo, “Protectors of the Alamo and Texas,” who settled their families in the San Antonio Mission in 1803. The painting features Jose Miguel Arciniega (military explorer and legislator), Joseph Gregorio Arciniega (a Spanish American patriot), and Ensign Florentine Felipe Arciniega standing in front of the Alamo in full uniform and weaponry. Our thanks to Donna Lee De Leon for sharing this news and the image of the painting with SMRC. Donna writes, “The Arciniega trio was sent to the San Antonio Mission in 1803, as seasoned mounted lancers in King Carlo III’s regiment The Secon Flying Company of San Carlos de Parras.  Jose Miguel was only nine, so he was not the mounted lancer yet. Their squadron was called the Alamo de Parras from which the San Antonio Mission was changed to El Alamo, (The Alamo) because the 100 mounted lancers lived in the Alamo and protected the citizens and the State of Texas from Anglo invasions and hostile Indians’ deprivations.  My Arciniega ancestors live[d] in the Alamo from 1803 to 1811 when Jose Gregorio Arciniega retired and petitioned the King for a Spanish Land Grant in downtown San Antonio, a few blocks from the Alamo.  Here, in this painting, I imaged they were standing proudly in front of the Alamo in their uniforms and weaponry as elite soldiers for the King of Spain.” You can read about this news on The Alamo’s website at https://www.thealamo.org/alamo-trust/pressroom/the-alamo-receives-gift-spanish-texas-collection?fbclid=IwAR0jH5k82cXGOxS_I4_YUGU7ga0_2O6JFr8QlAL-wAgKVjr_GAuV7OUFuqo.  You can also go to the JMADS Facebook page at https://www.facebook.com/miguelarciniegajmads.