Situated on a high bluff overlooking the Río Babasac, an eastern tributary of the Río Magdalena, are what surely are the most imposing church ruins in Sonora. 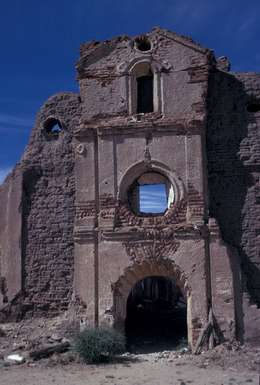 In the 1980s it became necessary for Mexico’s Instituto Nacional de Antropología e Historia—the caretaker of many of that country’s historic structures—to erect an unsightly scaffolding at the front of the building to prevent the Franciscan-added brick façade from pulling away from the original Jesuit adobe wall and collapsing into a pile of rubble. Even this distraction, however, cannot conceal the former magnificence of what was once the most unusual construction in the Pimería Alta.

Cocóspera was probably visited by Father Kino soon after 1687, although the earliest mention of it in his memoirs concerns a visit made there early in 1689 by Father Visitor Manuel Gonzáles. Either later in 1689 or in 1690, Father Juan del Castillejo became the mission’s first resident priest, but he served less than a year. From the outset, Nuestra Senora del Pilar y Santiago, famed in Spanish legend, had been made patrons of the village.

In 1697 Kino reported that Cocóspera had the “good beginnings of a church and house,” beginnings apparently brought to completion by February, 1698 when “the village, the church, and the father’s residence were sacked and burned” by an attacking force of some three hundred Jocomes, Sumas, and Apaches. Cocóspera’s position at the eastern edge of the Pimería Alta left it exposed throughout its active history to almost unimpeded raiding and revenge warfare by Apaches living in the mountains and valleys to the northeast and east.

Never one to be deterred, the always-optimistic Father Kino gave orders in 1700 “to roof the little church,” and in 1701 he saw to the erection of torreones (towers) as an aid in defending the settlement. The following year he began to erect an adobe church on a far grander scale. Cocóspera and Remedios were then visitas of his cabecera at Dolores, and he carried out a building program in these places at the same time. Kino was proud of this work, and he observed that as good as his church at Dolores was, those at Remedios and Cocóspera “turned out even better, for they have transepts, etc.” His account of their construction is a detailed one:

In these months and the following I ordered the necessary wood cut for the pine framework, sills, flooring, etc. I went to the interior and brought more than seven hundred dollars’ worth of clothing, tools and heavy ware and from other places I obtained more than three thousand dollars’ worth, which shortly and with ease were paid for with goods, provisions, and cattle of the three rich districts. I invited some (Indians) from the frontier for the work on these buildings, and there came far and away more than I had asked for; and very especially, for entire months, the many inhabitants of the great new pueblo of San Francisco Xavier del Bac, which is sixty leagues distant to the north, worked and built on the three pueblos of this place and of my administration. In this way many adobes were made in the two pueblos of Nuestra Señora de los Remedios and Nuestra Señora del Pilar y Santiago de Cocóspera; and high and strong walls were made for two large and good churches, with their two spacious chapels, which form transepts, with good and pleasing arches. The timbers were brought from the neighboring mountains and pineries, and the two good buildings were roofed, and provided with cupolas, small lanterns, etc. I managed almost all the year to go nearly every week through the three pueblos, looking after both spiritual and temporal things, and the rebuilding of the two above-mentioned new churches.

The new temple was dedicated in January 1704 “with all the ceremonies and benedictions which our Holy Mother Church commands, according to the holy Roman ritual.” Present among the invited guests was the “captain of the Yumas, with many of his people,” who had come all the way from the lower Colorado River bringing with them as gifts shells of the blue abalone, a marine animal absent in the Gulf of California but present along the Pacific coast of California. Kino correctly surmised that trade in such shells proved that California was connected to the Pimería Alta by land and was not an island.

After Kino’s death in 1711, Cocóspera fell into decline. In 1720 it was reported that the physical plant was in bad repair. By 1730 the church was essentially in ruins, and in 1746 Apaches delivered the coup de grâce by torching its remaining timbers and other wooden elements. Despite its ruined condition, Cocóspera took in O’odham refuges from Dolores and Remedios when those places were abandoned in the 1740s.

In 1751, the Father Visitor of the Pimería Alta went to Cocóspera, which was then a visita of Santa María de Soamca (today’s Santa Cruz, Sonora). Here he “preached twice to the Indians” who, he said, “did not know how to pray and had no catechist.” Moreover, he complained that the church linens were dirty and wrote to the minister at the cabecera saying he should have the linens taken to Soamca to be washed—as if the minister, whose people daily feared for their lives in the face of Apache raids, had nothing more important to worry about. 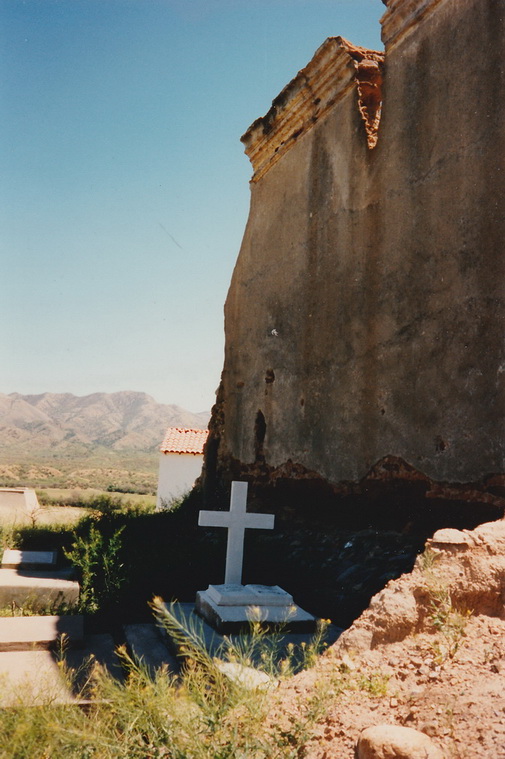 No sooner had the first Franciscan arrived at his cabecera of Santa María de Soamca in 1768 when Apaches attacked. He and the Soamca O’odham relocated to the Cocóspera visita, and in 1772 Father Reyes wrote that this Franciscan and “his Indians” were building a “new” church, although they were probably effecting major repairs on the Jesuit-built adobe structure, some of whose walls could well have been those of the edifice dedicated by Father Kino and others in 1704. Either way, their efforts were halted when in 1776 Apaches attacked once more and burned whatever they could. 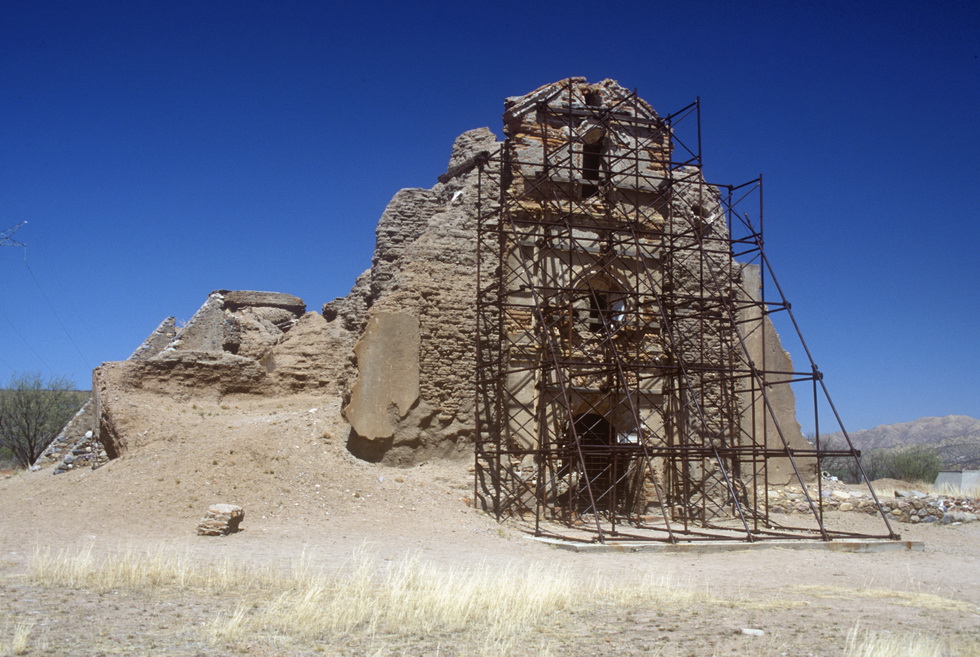 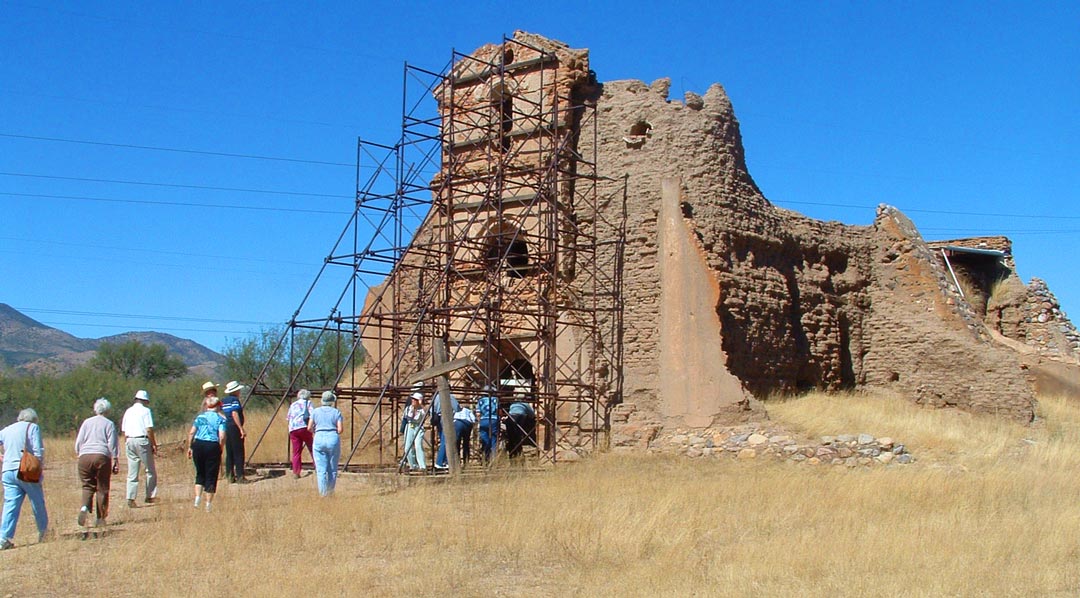 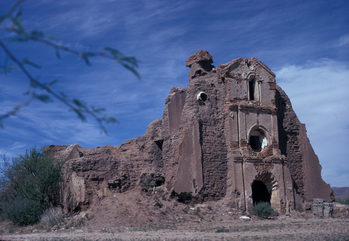 The savior of Cocóspera, Father Juan de Santiesteban, arrived here in 1784 and remained for seventeen years. Inspection of today’s ruins reveals that Father Santiesteban sandwiched the sun­dried adobe walls of an earlier Jesuit church, possibly that dedicated by Father Kino in 1704 and which had undergone many subsequent repairs and alterations. Besides new exterior and interior surfaces for the old walls, using a combination of sun-dried adobes and fired brick and lime mortar the friar added a new façade as well as a baptistery, sacristy, choir loft, and twin bell towers, each with a spiral staircase of mesquite wood. The roof of the building was unique among Pimería Alta temples. The exterior surface was a pitched roof covered with fired clay tiles—the first of record in the upper Pimería—set in lime mortar. The interior ceiling above the choir loft and nave was in the shape of a plastered barrel vault formed by dressed beams laid at right angles across the top of three arches. Small transverse poles, possibly ocotillo stems, were used to fill the spaces between the beams and to hold the plaster vault. The roof above the sanctuary, which remained until as recently as 1935, was a burned brick barrel vault.

Father Santiesteban left Cocóspera in 1801, and other Franciscans were assigned there until 1836. With the departure of the last Franciscan, and with Apache raiding on the increase, the population of Cocóspera rapidly declined.

In 1851, United States Boundary Commissioner John Russell Bartlett, who visited the site, said it had been abandoned “about six years before” because of Apache inroads. He found the church along with its towers and dome in a good state of preservation. Its interior, he wrote:

… must have been very beautiful in its time, when its numerous niches were filled with statues, and its walls covered with paintings. The gilded and painted ornaments upon the walls and ceiling still remained, consisting of crucifixes, doves, and other sacred emblems, surrounded by inscriptions, scrolls, and flowers, which displayed more taste than we had before seen in such buildings. Several wooden figures still stood about the altar; but the pictures were all gone. Bats were already in full possession of the edifice, and hung from the projecting walls and corners, like so many black ornaments; while the swallows which were flitting about us had also taken up their abode here, and added their mud-built nests to its interior decorations.

Cocóspera was temporarily occupied by would-be French colonists in 1851 and 1852, but those short-lived efforts gave way to intermittent abandonment alternating with times when squatters camped there. United States Treasury agent and journalist John Ross Browne paid the ruined church a visit in 1864. He wrote: 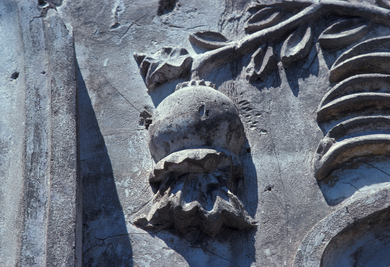 … A more desolate-looking place than Cocóspera does not perhaps exist in Sonora. A few Mexican and Indian huts, huddled around a ruinous old church, with a ghostly population of Greasers, Yaqui Indians, skeleton dogs, and seedy sheep, is all that attracts the eye of a stranger under the best of circumstances…. At the date of our visit the Apaches had just cleaned out the community of nearly all the cattle and sheep it possessed, killed one man, and filled the souls of the remainder with fear and tribulation, so that the place presented a very depressed appearance.

After he retired from the Mexican army in 1851, Colonel José María Elías González took up residence in the Cocóspera Valley. In spite of Apaches, he was able to operate his ranch in the valley until his death in 1864 at the age of seventy-two. Other members of his family continued to reside here, and in the late 1950s some of them erected the small burial chapel next to the Cocóspera ruins. The first whose remains were placed in a crypt here was José Elías Suárez, a nephew several times removed of the colonel. José Elías Suárez was a brother of Francisco Elías Suárez, governor of Sonora from 1927 to 1931. 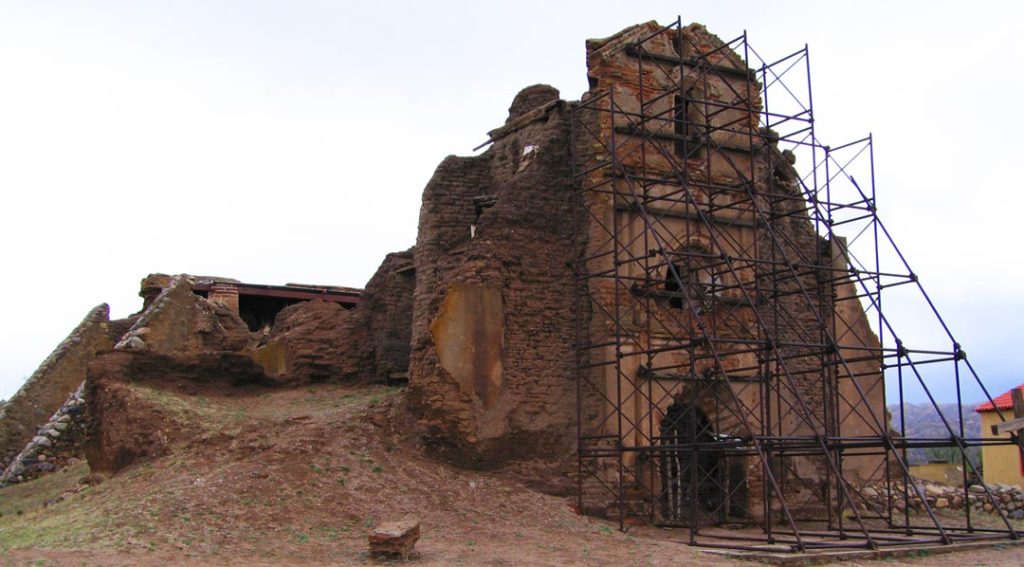 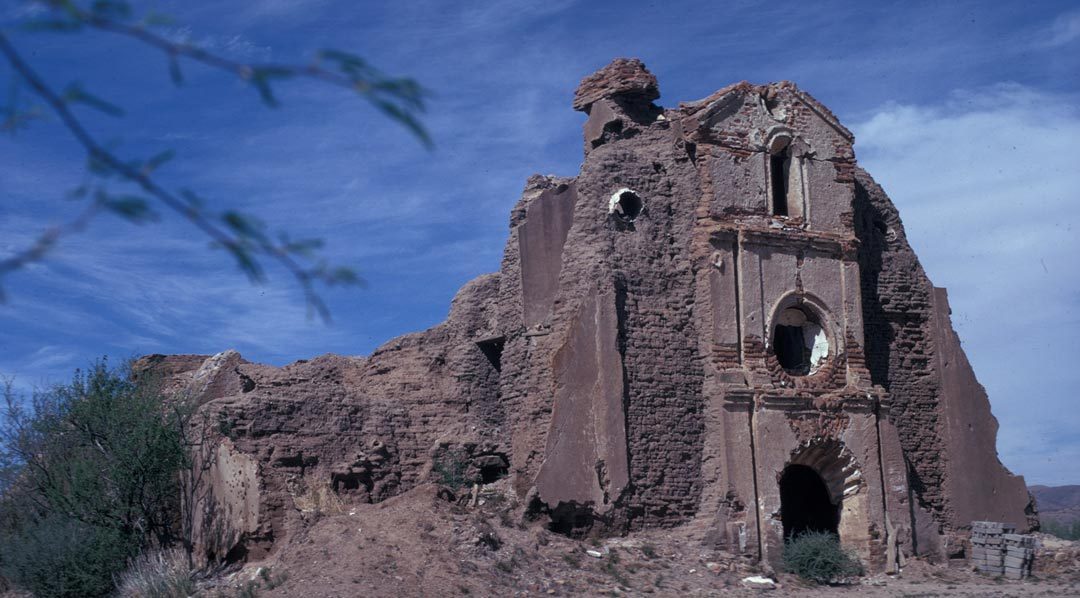 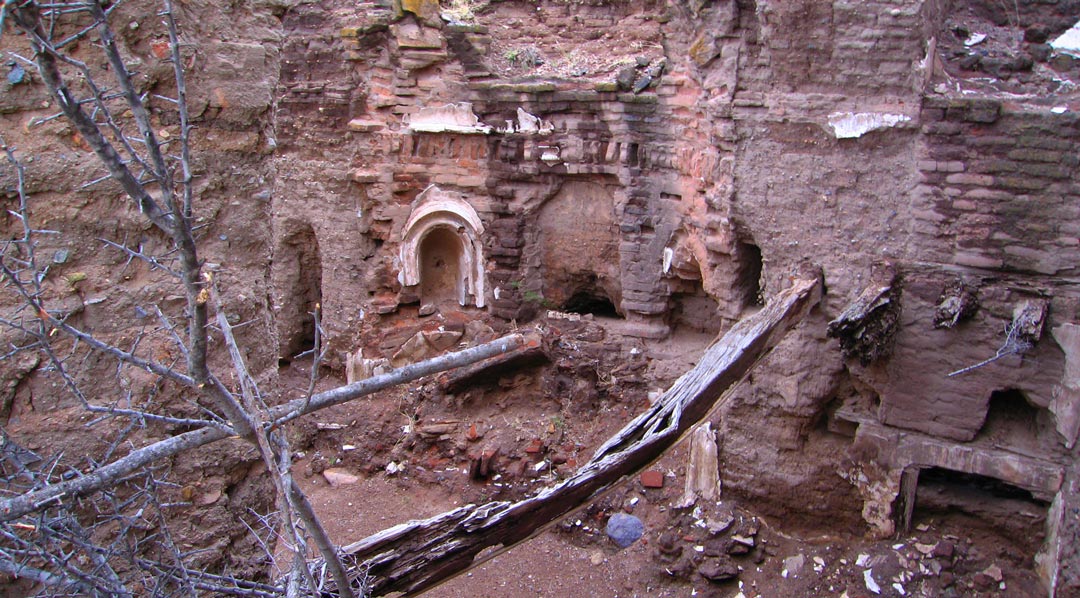 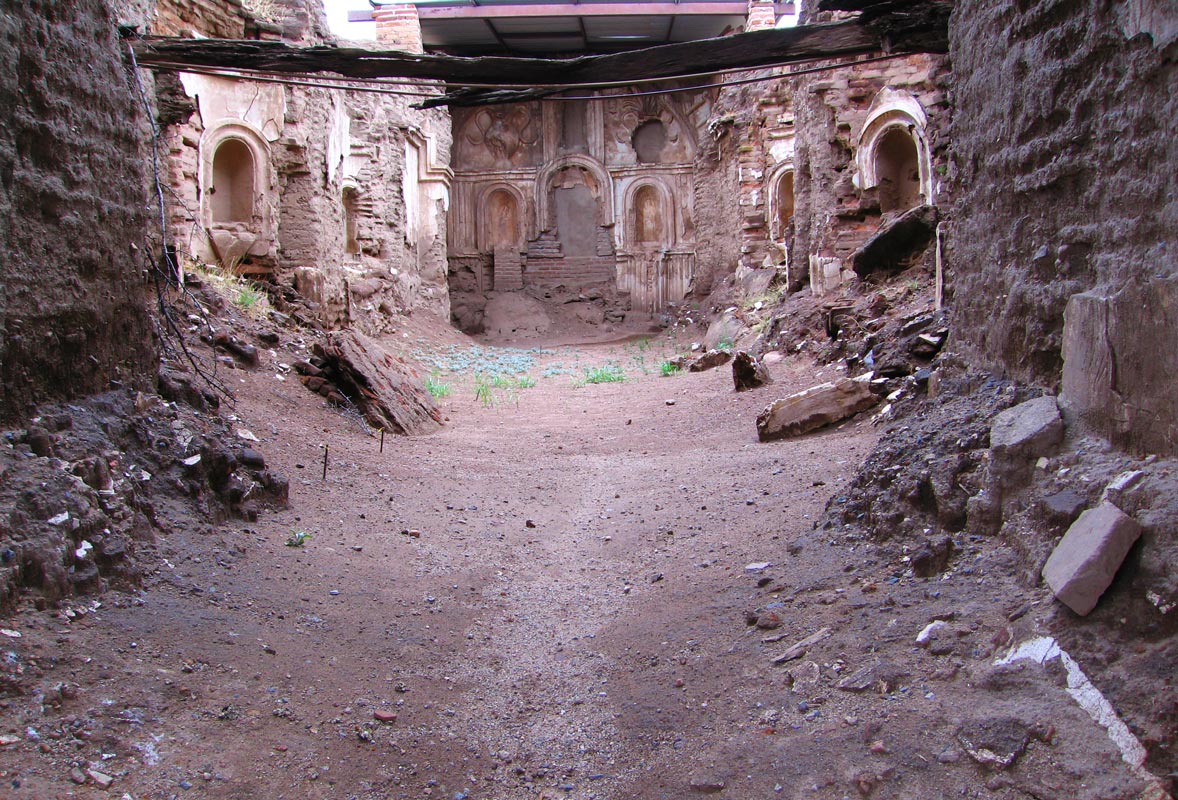 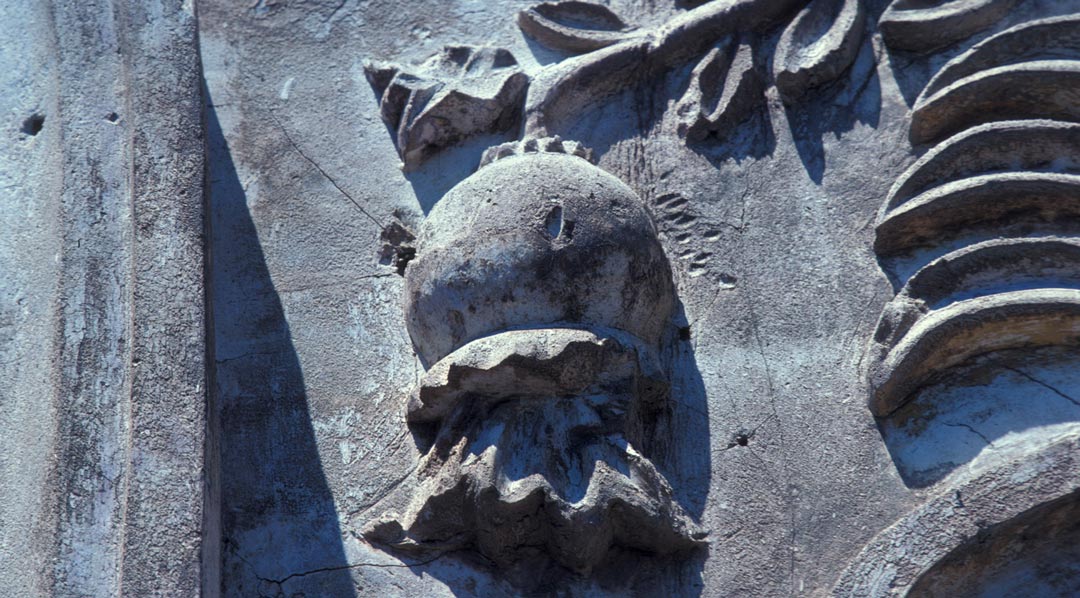 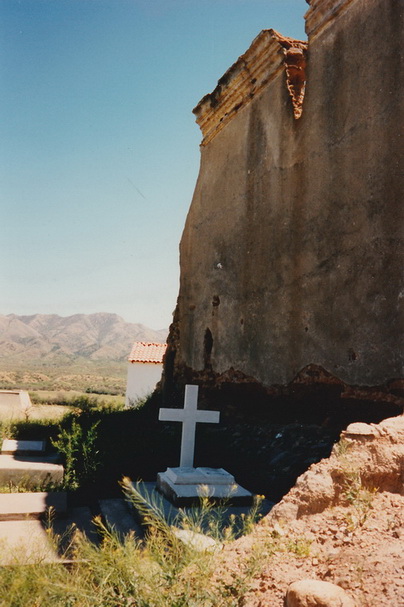