Because this was the headquarters of religious administration for the entire Pimería Alta during much of the Jesuit and Franciscan periods, it can be argued that after 1732, at least, it was also the most important church, the very hub of Pimería Alta mission activities. 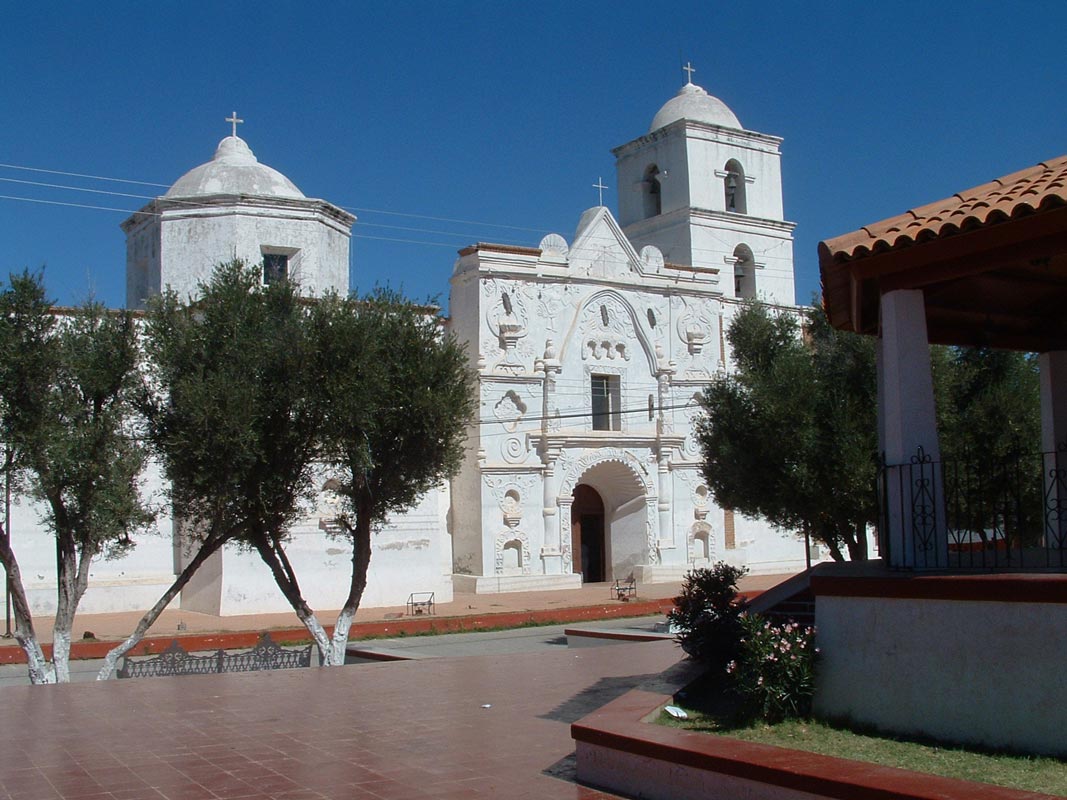 It is where Father Jacobo Sedelmayr, head of the Jesuit province of Pimería Alta, was stationed at the outbreak of the Pima Rebellion of 1751; it is where Jesuits gathered in 1767 for their expulsion; it is where Franciscans established their Pimería Alta headquarters in 1768; and it is where in 1776-77, Franciscan friars Francisco Garcés and Pedro Font cloistered themselves to write their lengthy accounts of their involvement in the 1775-76 overland colonizing expedition to Alta California led by Juan Bautista  de Anza.

Established by the Jesuits in 1691, the first mission building at Tubutama may have been destroyed in the Pima uprising of 1695. A second adobe church was completed in 1699 and a third may have been finished in 1706. Construction on a successor had been started in 1730 and a fifth, built of more than fifty thousand adobes, was underway in 1747 only to be destroyed in the Pima Rebellion of 1751. A diorama in the museum at Tumacacori National Historical Park in Arizona depicts the scene of the 1751 Tubutama conflagration.

While the 1751 rebellion had reduced Jesuit missionary Jacobo Sedelmayr’s house of worship to ashes, Father Luis Vivas, his successor in 1753, was able to build a new adobe church by 1764, one with two altars, a small side chapel, and a sacristy. The first Franciscan to reside there in 1768 begged that the civil commissioner give him some old cloaks and pieces of heavy Chinese linen left by the Jesuits so he could cover the windows of the building to keep out the bats. This was not a very impressive cabecera whose downstream visita of Santa Teresa was probably even less well off.

As at San Xavier del Bac and elsewhere, in the second half of the 1770s the Franciscans went to work to build a more substantial temple for Tubutama. In 1793, reporting from his mission station at Aconchi on the Sonora River, Father Antonio Barbastro, who served at Tubutama from 1776 to 1783, reminisced

… For eight years I was a missionary in the Pimería Alta at Tubutama, which has only eight families and is continually being harassed by the Apaches.

On various occasions I saw the enemy as close as the place where our women drew the water. On two occasions they stole the village oxen. On another two occasions they stole all the village livestock. Some of our village Indians they killed; others they took captive. They killed my missionary companion, Fray Felipe Guillén (in 1778). And yet, after clothing my village Indians, giving gifts to the Papagos (from the desert), and all the other ordinary expenses, I was able to build a church some eighty-two feet long and over sixteen feet wide, with a transept, a dome-shaped cupola above, and a famous facade. From the foundations everything was brick and lime plaster. On dedication day (in 1783) we featured eleven statues and a (liturgical) lamp all of silver. 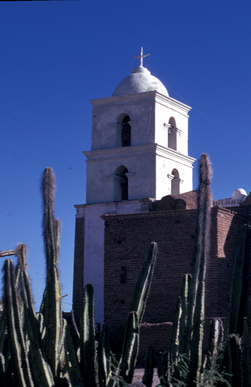 We know from other sources that Barbastro’s successor, Francisco Yturralde, who remained at Tubutama until 1799, also had a hand in the building’s construction. Both physical evidence and documentary records suggest that the baptistery, with its mudéjar arched entrance, was an Yturralde addition made before 1796.

Tubutama was perhaps the first settlement in the Pimería Alta laid out as a fortified town with the houses built into the ramparts and their doors opening onto the plaza. The walls had only two narrow gates which were closed sundown to sunrise to protect the people and oxen enclosed inside at night. Father Barbastro wrote: “At dawn, which is the most dangerous time, I ordered them to ring the seven (church) bells and to keep it up till the sun rose. The people and their cattle did not leave the village until the sun was quite high and the whole mission had been fortified. There were three guns with enough powder and balls.” 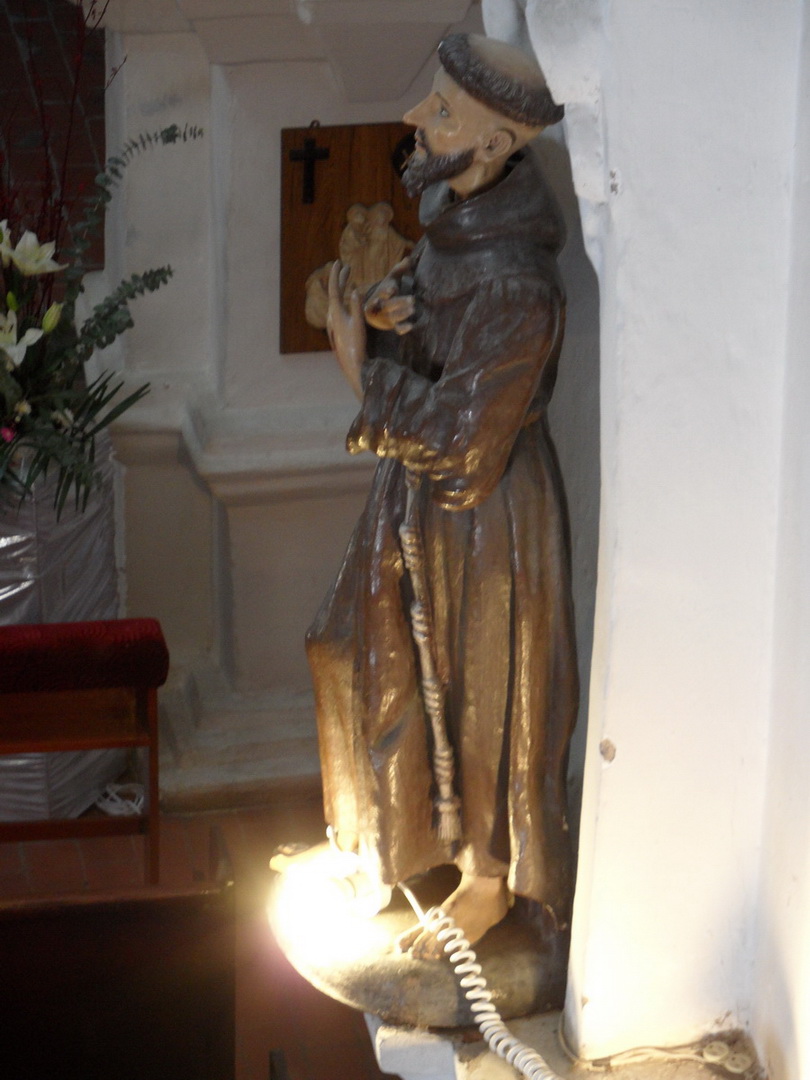 The interior of Tubutama’s church is especially noteworthy for a transept dedicated to the Passion of Christ and which has sculptured in plaster in bas-relief on its altarpiece instruments of the Passion: crown of thorns, scourge, nails, tongs, ladder, and lances. A sculptured serpent crawls beneath an upper niche in the same altarpiece. This recess now holds a carved statue of Our Lady of Aránzazu, an image of the Virgin Mary as she appeared at Aránzazu in the Basque country of northern Spain. Oral tradition holds that the statue was originally in the chapel in Tubutama’s downstream visita of Santa Teresa, now an adobe ruin. Given the large numbers of Basques who played key roles in the viceregal period of Sonoran history (Juan Bautista de Anza, for example, was a Basque), it is not surprising Our Lady of Aránzazu should have found her way here.

The early eighteenth-century carved-wood main altarpiece, which features five oil paintings depicting scenes in the life of San José (Saint Joseph), is obviously one originally intended for use in a church dedicated to San José rather to San Pedro y San Pablo (saints Peter and Paul). There is a possibility it may once have adorned the post-1751 Jesuit edifice at San José de Tumacácori, or, less likely, it may have been in the interior of the Jesuit chapel at San José de Ímuris. It may also have been sent to the Pimería as a donation by a more affluent congregation farther to the south, a parish whose clergy and flock may have regarded it as being out a of style and therefore worthy of a needy mission on the frontier.

Other unusual decorative elements in Tubutama are the carved wooden pomegranates pendant from the ceiling beneath the choir loft.

Visitors are charmed by the bas-relief sculptures on the building’s facade. Not only is there a sun dial here, but so is there a pair of angels, each carrying a rooster—one of the emblems of Saint Peter. 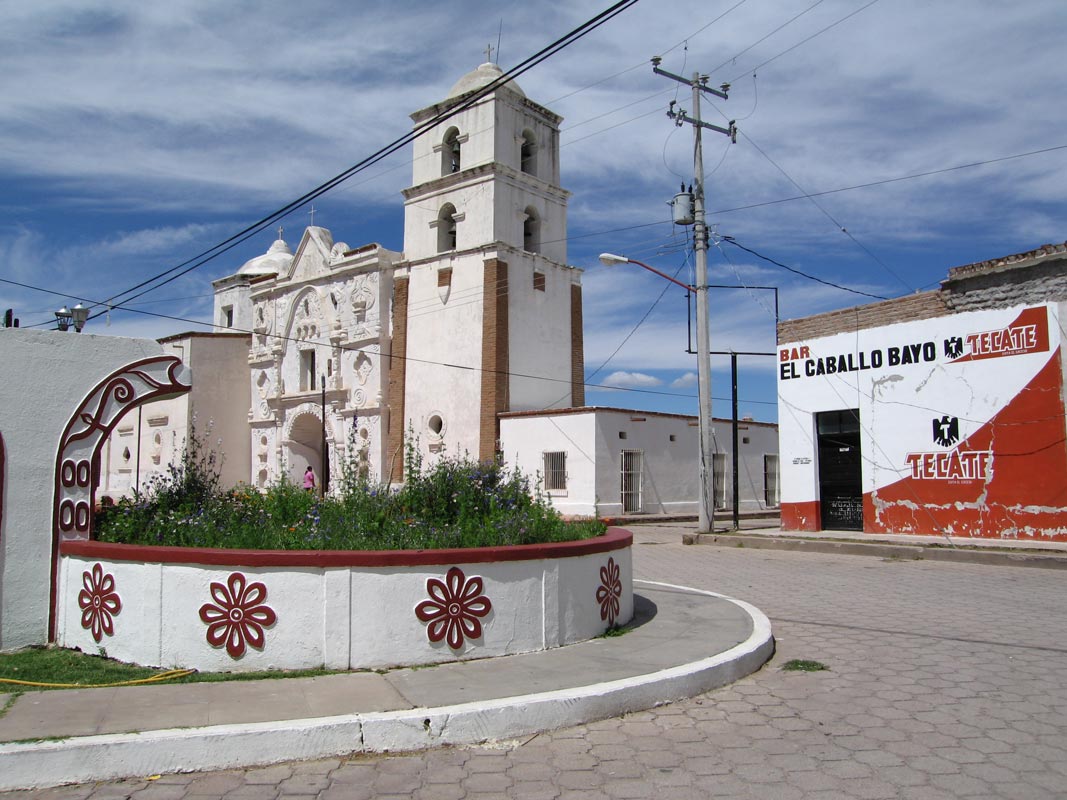 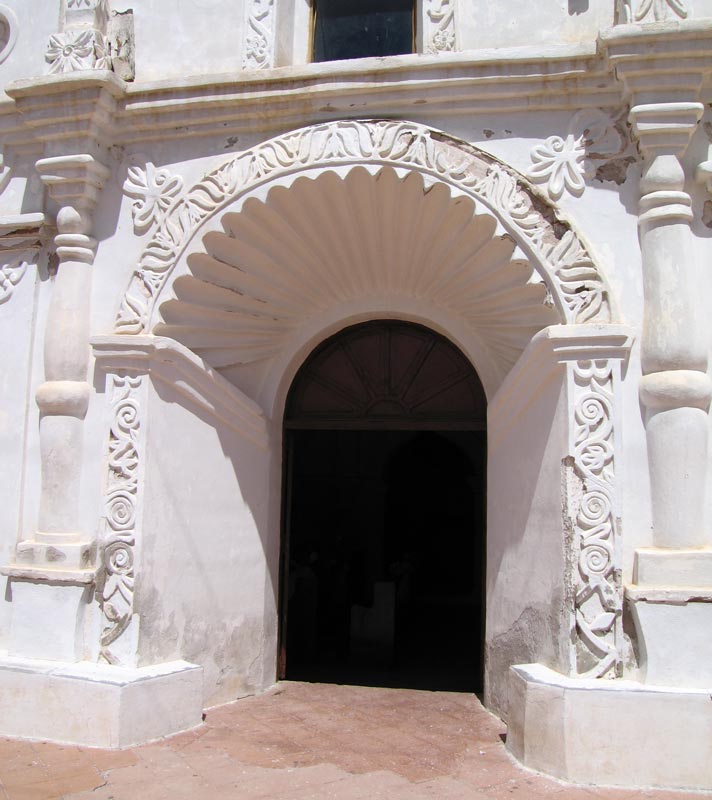 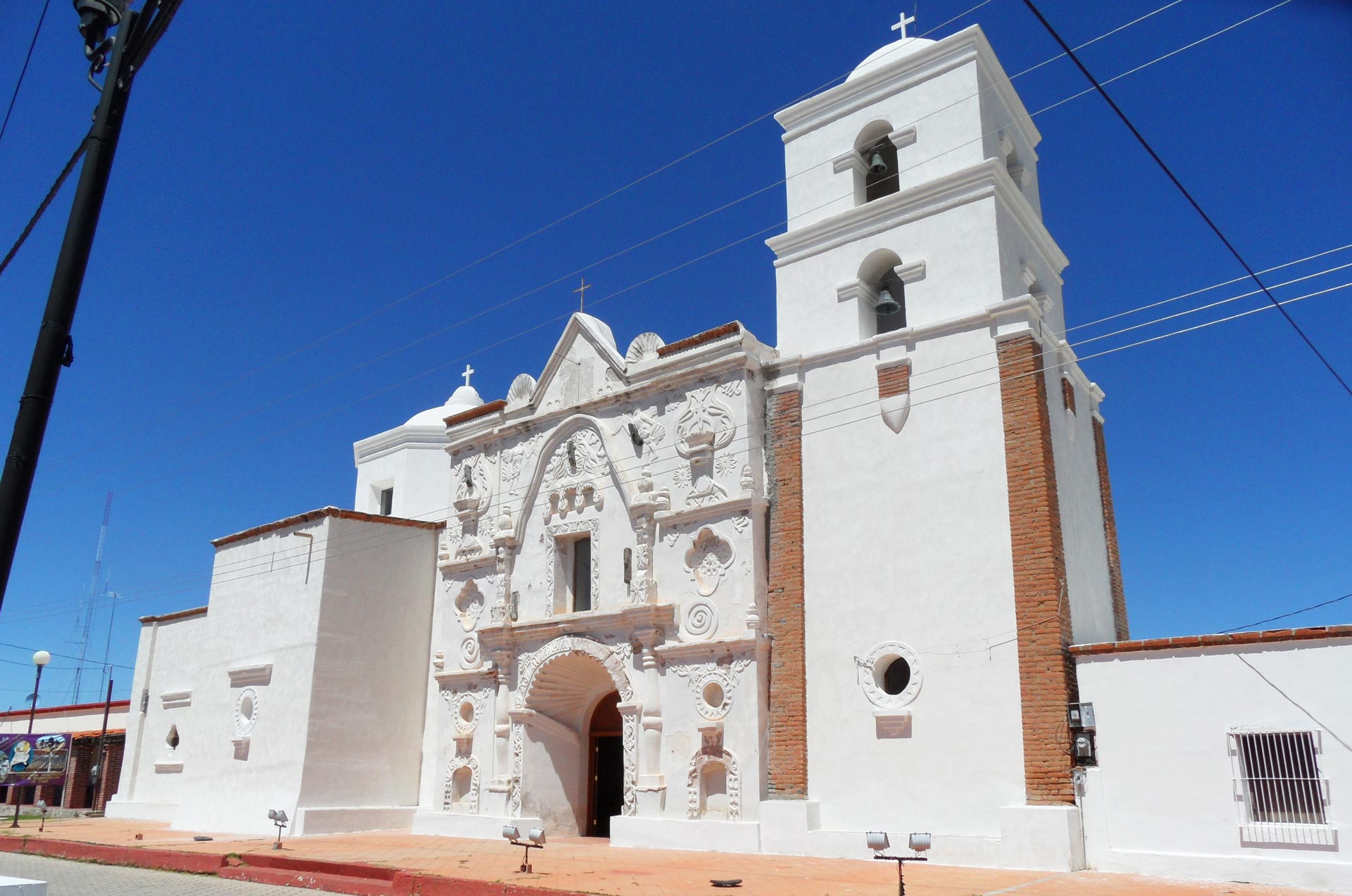 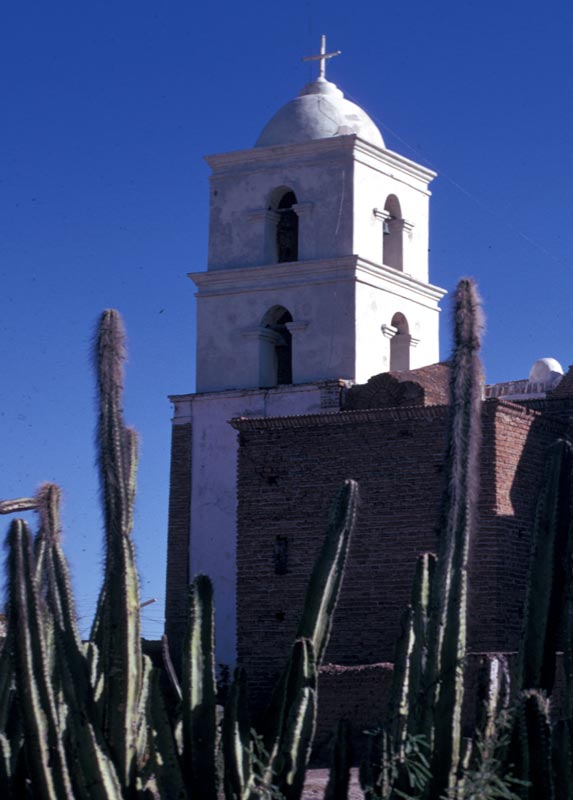 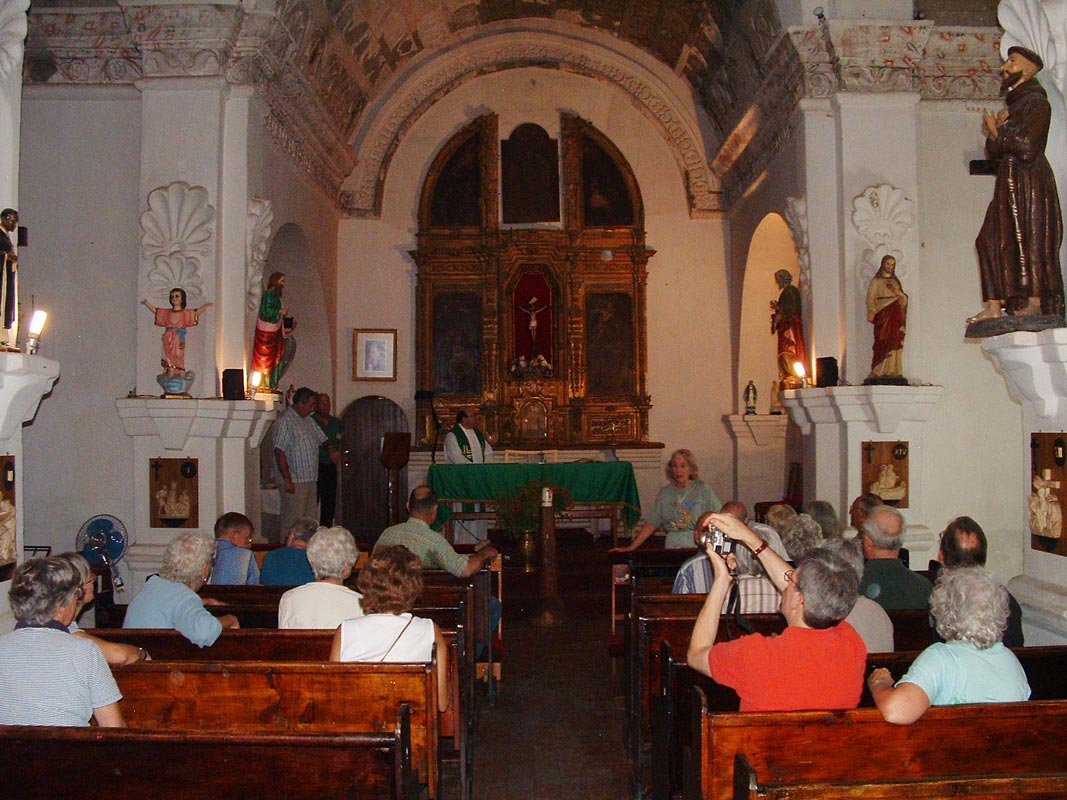 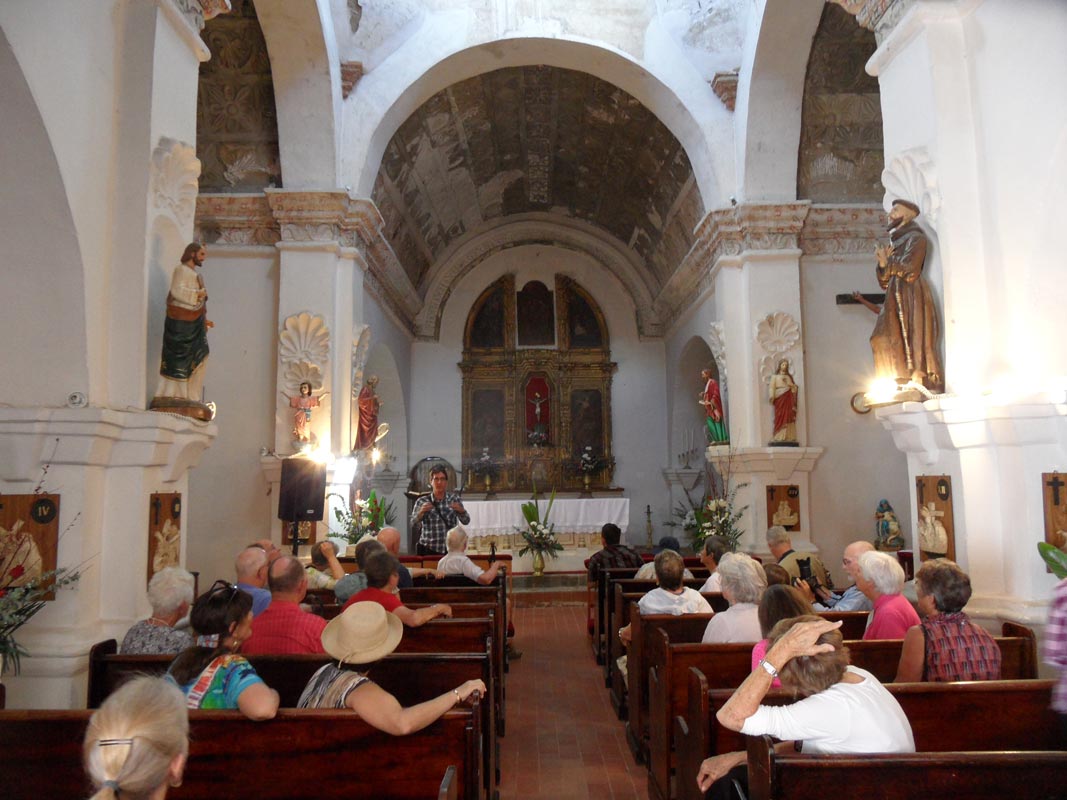 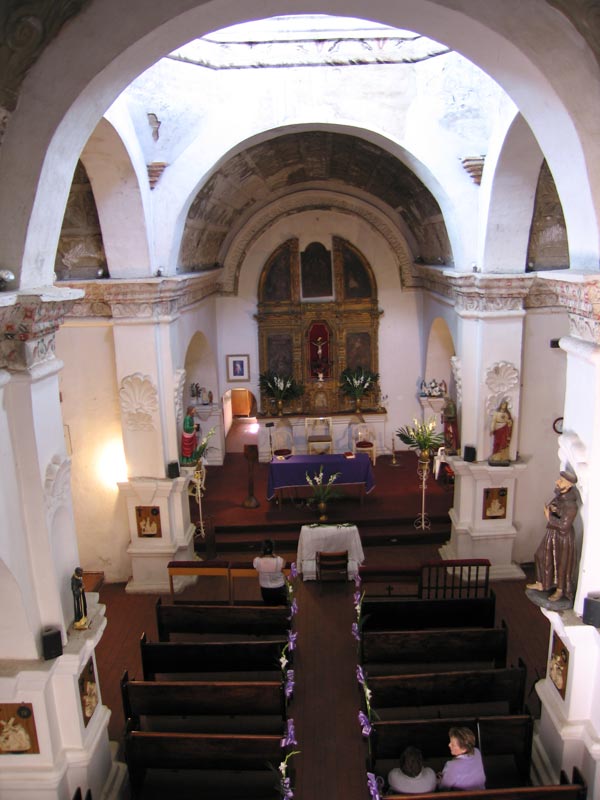 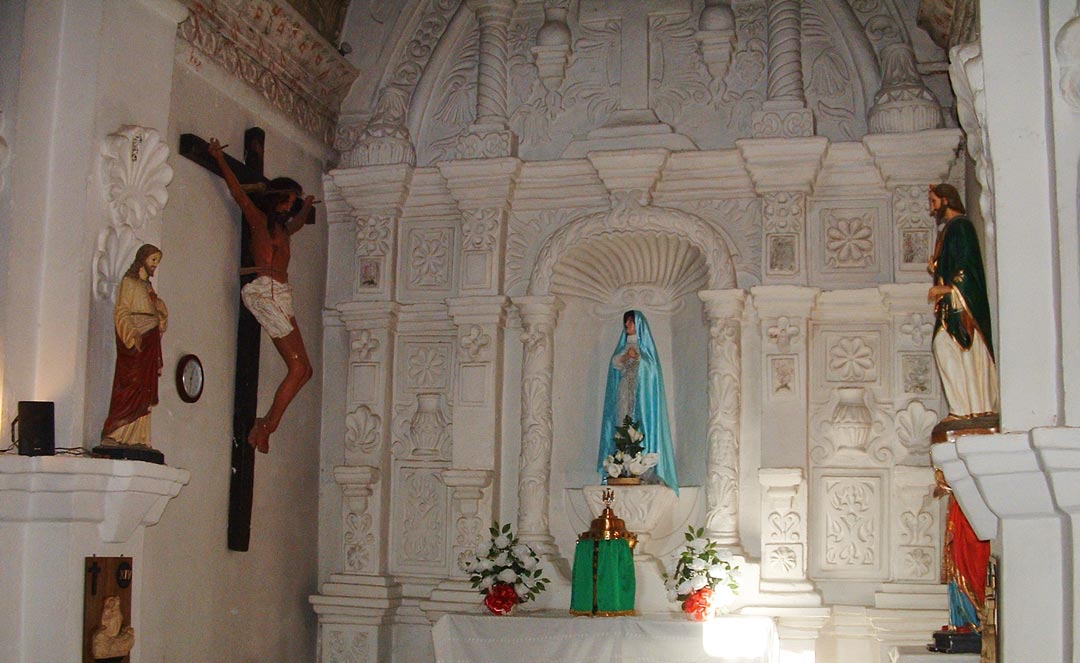 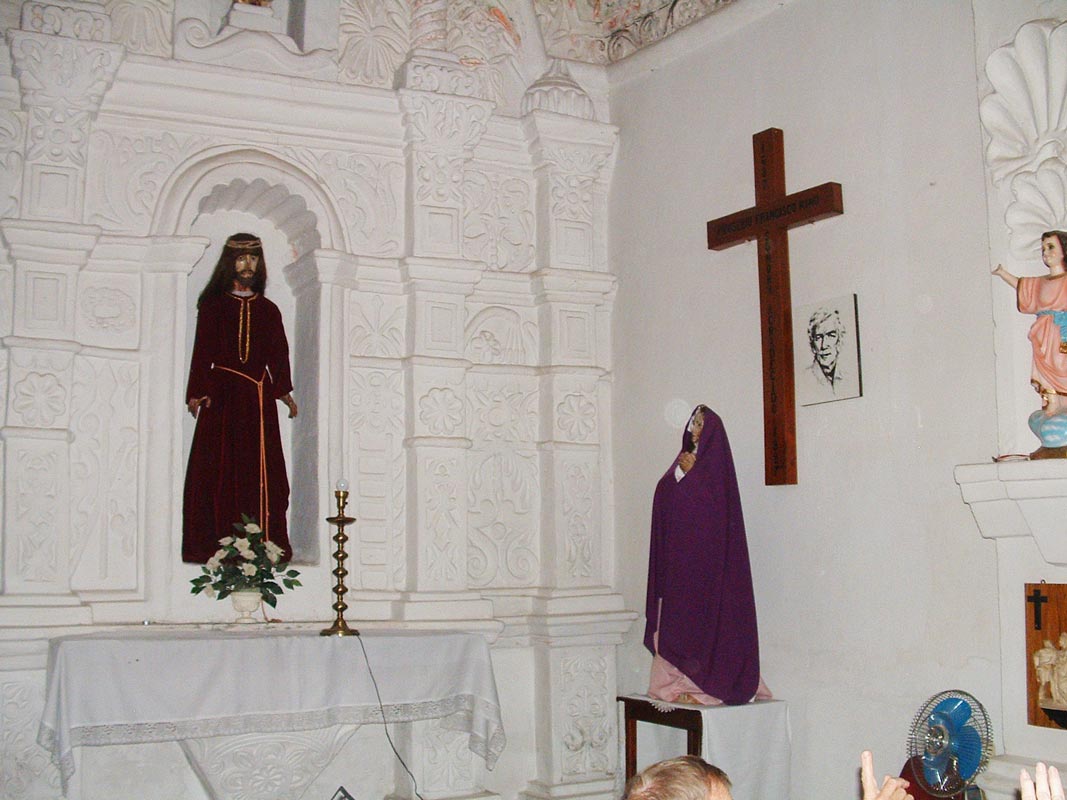 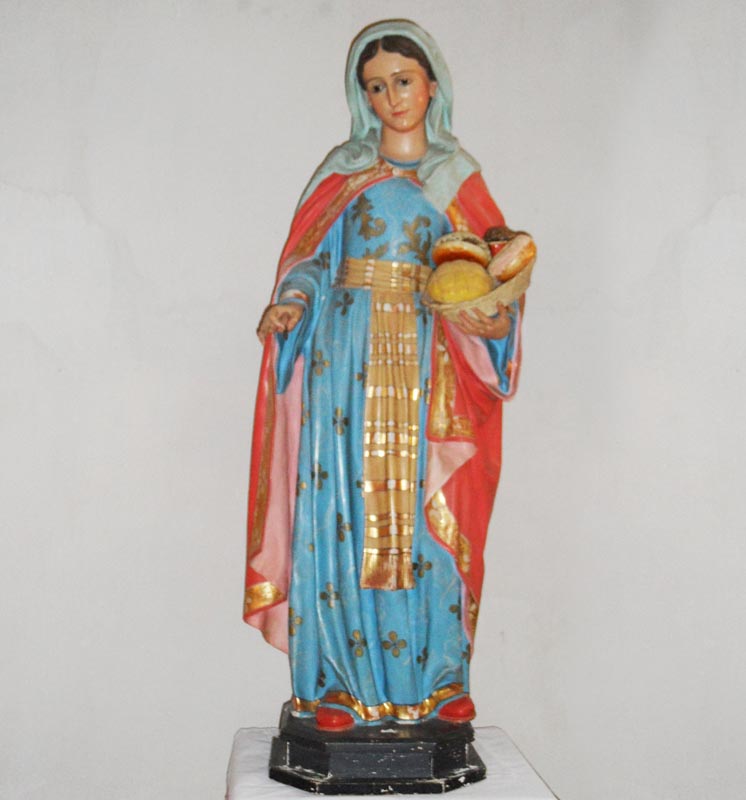 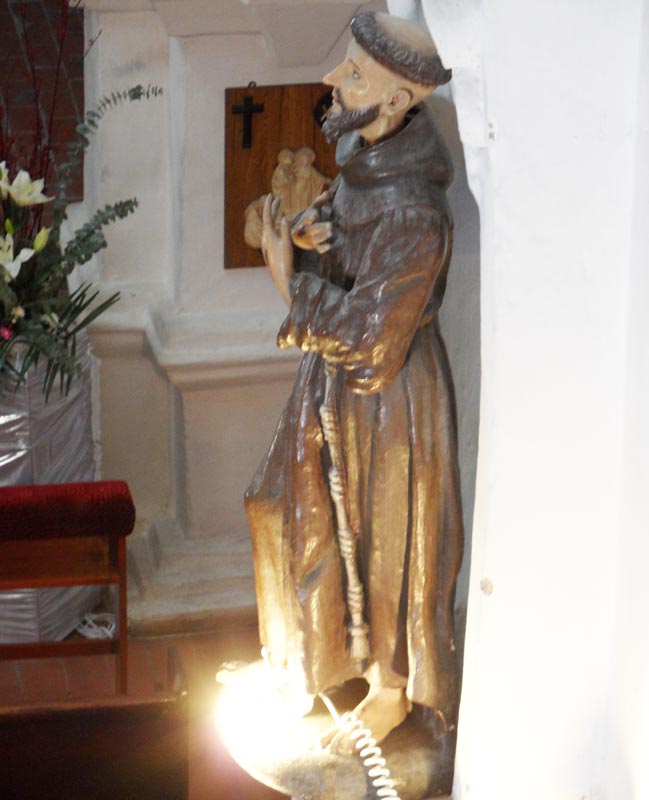 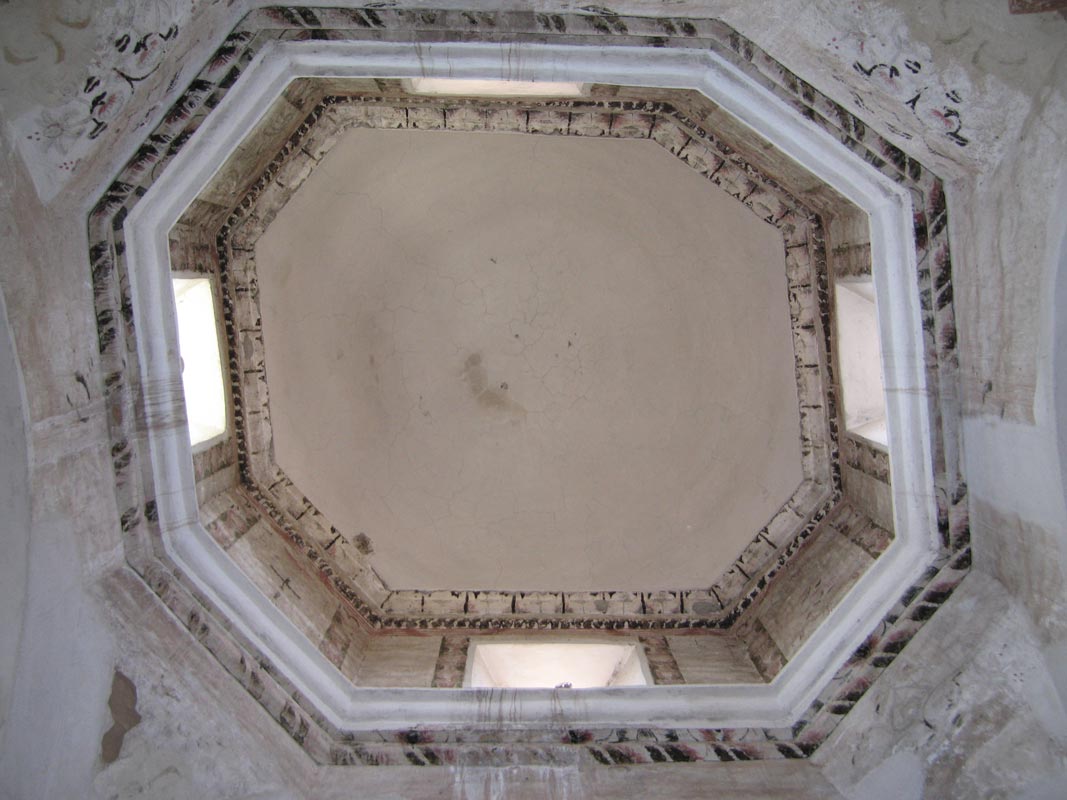 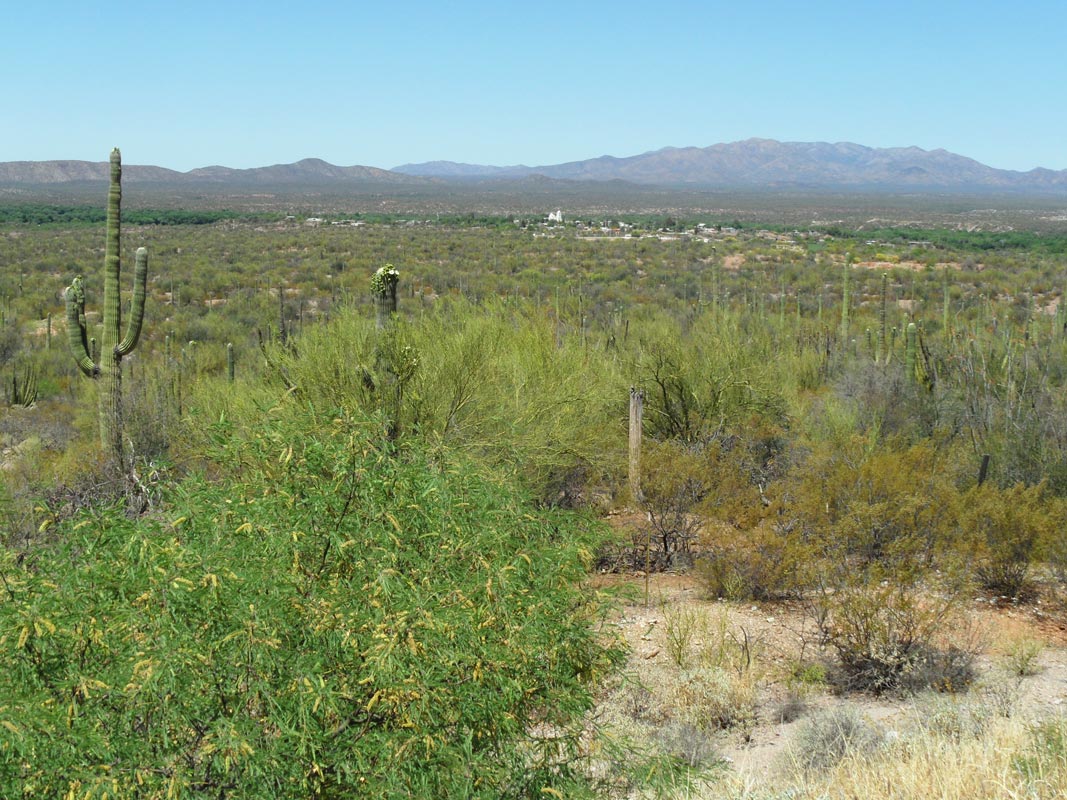 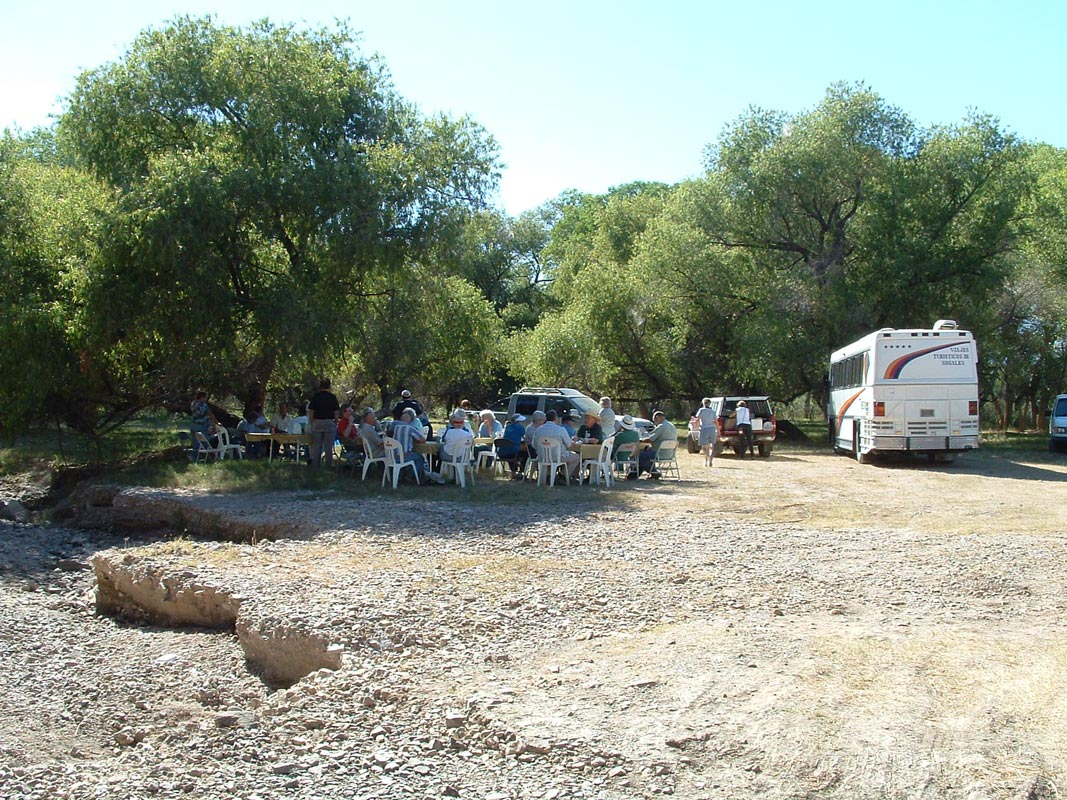