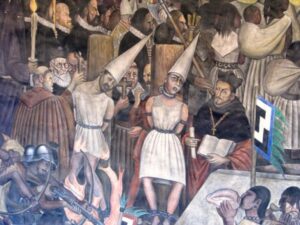 The Arizona State Museum’s (ASM) Master Class titled The Spanish Inquisition, Old & New World Varieties will be taught by Dr. Michael M. Brescia, Curator of Ethnohistory and affiliated Professor of History and Law (and SMRC President) on October 19, 21, 23, 26, and 28, 2020 at 9:30 a.m. (Arizona time). This new ASM Master Class subjects the Inquisition, as both a European and New World institution, to rigorous examination. The class will explore the laws, procedures, and practices that fashioned the Inquisition into a religious, political, and cultural instrument of power that was wielded by the Church but often in support of an expansive State, from its origins in medieval Europe to its transfer to the Spanish colonies to its eventual demise in the early nineteenth century. The class will also assess a series of case studies in order to identify what brought people before the Inquisition, including, for example, accusations of conducting Jewish and Muslim practices, idolatry, blasphemy, crimes against the Catholic sacraments, witchcraft and sorcery, as well as the illicit use of flora, fauna, and human matter, and, finally, publishing books and treatises that promoted heresy or political sedition. For more information and to register for this class go to https://statemuseum.arizona.edu/events/asm-master-class-spanish-inquisition. This is a Zoom presentation.